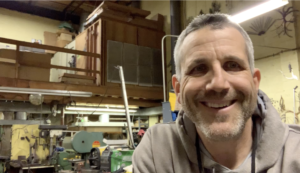 Gary Berger, son of Raymond Berger (1929-2017) continues to carry his father’s “torch” and further his father’s legacy as a prominent metal sculptor and artist. Gary learned at the age of four how to hold an acetylene torch and forge small items out of metal. All his life, Gary grew up in a family full of artists. His mother, Elizabeth, was an accomplished oil painter and his grandmother, Shirley Berger, owned an art studio and taught hundreds of students oil painting in Brooklyn New York from circa 1930-1970s.

Gary Berger worked part time at his father’s shop while attending college at Towson State University from 1988-1991. During this time Gary learned the details of the trade and was allowed to contribute his artistic input to many of his father’s designs and fabrication processes. Some of Gary’s major contributions included “The Humming Bird”, “The Golden Angel”, “The Prince Frog”, “The Cheap Leaf”, “Dolphins”, “Ducks” & “The Bonsai Tree”.

When Gary isn’t in his shop or teaching martial arts he tries to get out on the water. Gary is an avid fisherman and loves to go crabbing on the Chesapeake with his family. Gary is married to Danyelle Berger and together they have two sons named Bryce and Tristan.